My friend’s father recently passed away at the impressive age of 99 ½. This man had clearly been doing some things right! My friend, Bill, told me his dad had been an accountant who possessed the impressive ability to make mental calculations with unfailing accuracy. Just a few months before he died, he had lamented to Bill that while doing his bills, he had made a mistake in his arithmetic. For him, mental decline was no forgone conclusion in old age. Maybe this was a key to his healthy longevity. Another may well have been his advice to his children, “Good habits make life easier.”

In his 2012 book, The Power of Habit, Charles Duhigg illuminates some remarkable research on the formation and elimination of habits. They emerge as energy savers, allowing our minds to “ramp down” and go into an automatic mode to accomplish what’s ahead of us, whether it’s mental, physical or emotional. Habits, good and bad, can make all the difference between a human’s success and failure.

According to Forbes, Steve Jobs wore a black turtleneck, jeans and sneakers every day. Albert Einstein alternated between several identical grey suits. Both reasoned, why waste brainpower on choosing an outfit each morning? Obama does the same. “I don’t want to make decisions about what I’m eating or wearing. Because I have too many other decisions to make.”

Duhigg’s book explains the anatomy of our habits. They all begin with a cue. For example, when you walk into the movie theater and smell the popcorn, you head to the concession counter. The routine is the automatic response the cue has signaled. It may be physical (a morning run at 6 a.m.); mental (The Late Show monologue ends and you begin to yawn and feel sleepy); or emotional (When you’re feeling ignored by your spouse, you sulk). 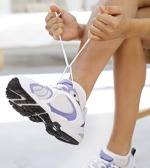 If the routine makes you feel good, the reward is established. It tells you whether or not this particular action is worth repeating in the future. If you got your partner’s attention by sulking then you’ll use that tactic again. If the movie popcorn was tasty, then you’ll look forward to it next time. If you felt energized and fit after your run, it will likely become your routine.

The discovery of this loop is so important because it shows that if we can interrupt the cycle we can change the habit. Habits are powerful yet delicate. Duhigg talks about the “craving brain” behind strong habits. If the reward is really good, we form a sort of addiction to that reward and crave it. Think of how our cell phones ding each time a new email arrives. We crave the distraction or stimulation the email brings. Yet, when the cell phone chime is muted, we tend to forget about the incoming emails, and don’t miss the interruption. So the cue doesn’t only trigger the routine, it signals anticipation of the reward.

Maybe the most significant takeaway is that we can’t extinguish a bad habit, but we can interrupt the habit loop. We can replace the routine with something healthier to get the same reward. A mid-morning coffee break brings caffeine, donuts and a chance to socialize. Take away the donuts – possibly substituting a bagel or piece of fruit – and you still have coffee and friends. A stimulating and gratifying reward is still in place. In the case of a bad emotional habit of sulking, the reward you’re seeking is attention from your spouse. Is there a more constructive way to get that?

The three-part-loop looks simple, but changing habits is not easy. However, change is virtually impossible without the self-awareness it takes to recognize the cue, craving and reward. You’ve got to break it down in order to change it.

Support is also useful, but not critical, to habit change and the formation of new habits. Surrounding yourself with like-minded people (those who also want to cut out donuts) will add to your chances of success. An exercise buddy is a great example, as is a partner who also wants to improve his/her eating habits, a coach for support and accountability, or a friend at work who wants to quit smoking.

What time of day do you consume the bulk of your daily caloric intake? Do you graze throughout the day, consuming multiple small meals and snacks? Is your appetite slow to get going, but voracious in the afternoon and evening? Or do you follow the adage, “eat breakfast like a king, lunch like a prince, and dinner like a pauper?” 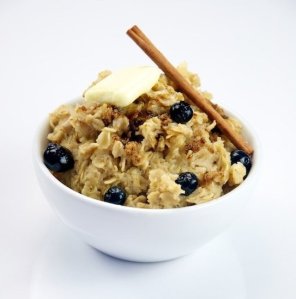 We all know the bottom line in weight management is all about balancing calories consumed vs. calories burned. However, new research supports the idea that you may burn more calories if you consume them earlier in the day. Here’s why:

Apparently, our bodies are meant to fast for about 12 hours, i.e. when it’s dark out. When you wake up, your metabolism is at its lowest point of the day. By eating a solid meal within an hour of waking, you will effectively jump-start your metabolism and let your body know that your day has begun. That done, your body will go on to use calories and nutrients more efficiently throughout the day.

If you are one of those people who just isn’t hungry first thing in the morning, take a look at what you ate the latter half of the previous day. How much and what did you eat after 8 pm? And if you prefer to eat a later dinner, say 9 or 10 pm, what are you eating around 5:30 or 6 to stave off those hunger pangs? Some argue that Europeans generally eat later and don’t have nearly the same problem with obesity seen in America. Yet remember that Europeans traditionally eat a larger midday meal, and we should also take into consideration their level of activity (i.e. walking vs. driving) and their food choices (the Mediterranean diet).

Being a night owl just might make it more difficult to lose weight. The International Journal of Obesity reported that people who stay up late consume an average of 248 more calories per day than their counterparts that get to bed earlier. So if you tend to stay up late, try adjusting your sleep/wake cycle back an hour or so. 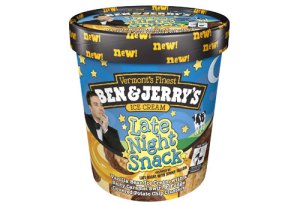 Remember my earlier blog post that described willpower as a muscle that can be exhausted and effectively used up throughout the day? Our willpower isn’t the same at the end of the day, so we are more apt to make bad food choices, and give into glucose-replenishing sweets and starches.

On the other hand, sleep replenishes your glucose, and when a new day dawns, you’re much more likely to eat a healthy breakfast. Even if you’re not in the mood for typical morning fare, remember that starting your day with breakfast will set you up to metabolize your food more efficiently throughout the day.

One last tip – if you’re tempted, as we all are, to eat less-than-healthy food in the hours before bedtime, try postponing gratification. Tell yourself that if you pass on the brownies now, you can have them for breakfast. Shocked? Well, it’s better than eating them at the end of the day, and surely, once you have the clean slate of the day ahead of you, you’re probably going to make a healthier choice than brownies for breakfast.

NPR.org. Blog, The Salt: What’s On Your Plate, “To Maximize Weight Loss, Eat Early in the Day, Not Late”
Yahoo Health. “Eat Breakfast Like a King”
Health.com. “Can You Eat Late and Still Lose Weight?”

Begin by preparing brown rice. As the rice cooks, combine black beans and diced tomatoes in a large skillet over medium heat. Add cumin, coriander and black pepper. Heat for 10-15 minutes. Heat tortillas until golden but not crispy.

Meanwhile chop vegetables putting them out, smorgasbord style, along with cheese, sour cream and salsa. Create your tortilla using a combination of your favorite ingredients. Vegans can leave out the dairy. If you’re limiting carbohydrates, omit the rice or even the tortilla.

Notes
This recipe is healthy, cheap, adaptable, and easy. It is such a staple in my house that we refer to it by the shorthand, “Mexican.” I always keep black beans and diced tomatoes on hand. (Buy BPA-free canned goods whenever possible.) Good tortillas can make or break this meal. A delicious uncooked option is available at Costco. Toppings can include whatever you have on hand. I pile my tortilla high like a salad and eat it with a fork and knife. My kids prefer theirs burrito style.

This is a great opportunity to make extra rice for meals throughout the week. Leftover chopped vegetables can be stored in glass containers and thrown into tomorrow night’s salad. Sometimes I add frozen corn or a cooked, diced sweet potato to the beans. Fresh cilantro is always a nice addition. The possibilities are endless.

When it comes to food storage, if you haven’t made the switch from plastic to glass, here are 7 reasons to do so, and a few tips to make it easy. Simply put, glass makes sense whether saving leftovers in the fridge or storing beans, grains, pasta and snacks in the pantry.

Since tossing the Tupperware, I’ve experienced the following epiphanies:

In the 70s and 80s, there was a lot of concern that artificial sweeteners cause cancer. Although research in the 90s led the FDA to approve five sweeteners* without a cancer warning, if you’re like me, you have lingering doubts about putting something known to be “artificial” in your body. Is there true cause for concern?

Like most things, artificial sweeteners are best consumed in moderation. These substances–created in a laboratory setting–are anywhere from 30 to 8,000 times sweeter than natural sugar, so a little goes a long way. Be aware that certain artificial sweeteners have been found to cause unpleasant side effects; namely headaches from aspartame, and diarrhea from sorbitol, Lactitol and mannitol (sugar alcohols).

Here’s what I found most surprising and concerning: If you are consuming artificial sweeteners in an effort to lose weight, research has found that doing so may be associated with weight gain and an increased risk for Type 2 diabetes. Scientists believe this is due to the stimulation of taste receptors in our esophagus and stomach. Just like sugar, artificial sweeteners trigger these sensors that in turn cause the pancreas to release insulin, the hormone that tells our cells to absorb sugar (glucose). But what if there’s no glucose to absorb?

Researchers think that the body gets confused when it senses sweetness but there are no corresponding calories. For example, when you drink diet soda, two things may result:

Susan Swithers, a behavioral neuroscientist at Purdue University co-authored a study that supports these findings, and says they “might explain in part why obesity has risen in parallel with the use of artificial sweeteners.”

A 4-year study on the consumption of diet and sugary sodas and incidence of type 2 diabetes involved 66,118 women and was published this year in American Journal of Clinical Nutrition. Their most frightening findings were:

Finally, since the artificial sweetener in soda and other products is so much sweeter than real sugar, your tolerance and taste for sugar is reset, requiring more sugar to satisfy your sweet tooth. So if you have a strong diet soda habit, think about cutting back. If “sugar” is the hook, try gradually reducing your intake of sweet foods and drink, and in a few weeks time you’ll feel satisfied with much less. If caffeine is what you need, switch to coffee or tea (not from a bottle) so that you can control the amount and type of sweetener your consuming. Increase your water consumption and crowd out the number of diet sodas you drink each day. However you tackle it, the most important step is to realize there is no benefit to diet soda – not even for your waistline.